Most of Alaska is surrounded by water. To the north and northwest, respectively, are the Beaufort Sea and the Chukchi Sea, both of which merge into the Arctic Ocean. To the southeast is the Gulf of Alaska, which blends into the Pacific Ocean. The Bering Sea is to the southwest.

The Arctic Ocean is the smallest of all the oceans. It lies almost entirely above the Arctic Circle and is extremely cold and covered in ice most of the time. It is divided into two basins, the Eurasian Basin, and the North American Basin, by the Lomonosov Ridge. The outlets for this ocean are the Bering Strait, between Alaska and Russia; the Davis Strait, between Greenland and Canada; and the Denmark Strait and the Norwegian Sea, between Greenland and Europe. This ocean is home to fish, seals, walruses and whales due to its low temperature. The center of this ocean is covered by an average 10-foot-thick polar icepack that extends outward during the winter months, doubling in size and extending to encircling landmasses. Open seas surround the icepack during the summer months but it never completely disappears.

The Pacific Ocean is the largest of all oceans. It covers about 28 percent of the global surface and is 15 times the size of the United States. During the winter, sea ice forms and many ships are also subjected to icing from October to May. The Pacific Ocean is home to marine life forms such as sea lions, sea otters, seals, turtles and whales. Economically, the Pacific Ocean offers accessible, relatively low-cost sea transportation, extensive fishing grounds, offshore oil and gas fields, minerals, and sand and gravel for the construction industry and more than 60 percent of the world's fish come from the Pacific Ocean.

The Alaska Current and the Alaska Coastal Current take over the Gulf of Alaska. These currents function as pathways for organisms and the resources upon which they depend. A few inlets, such as Cook Inlet and Prince William Sound, protect organisms from the strong currents. This gulf contains many large glaciers and icebergs that are carried to sea by the strong currents.

The Bering Sea is one of the largest marine ecosystems in the world. It is between Siberia and Alaska. To the north, it is connected to the Chukchi Sea and Arctic Ocean by the Bering Strait; the Pacific Ocean lies to Bering Sea's south, past the Aleutian Islands and the Alaska Peninsula from which the islands trail. The Bering Sea is home to many large birds and marine animals, such as fur seals and whales. The sea's temperature increased over the past 50 years, reducing certain fish and marine animal populations. This worries people in the fishing industries, as this sea has been one of its major sources of fish.

The Beaufort Sea is north of Alaska within the Arctic Ocean. It was named after the British rear admiral Sir Francis Beaufort. The sea covers about 184,000 square miles and the average depth is 3,239 feet, but it plunges as far as 15,360 feet down. The sea is frozen solid in the central and northern area with the coastal icepack opening in August and September. Whales and sea birds are two of the most common animals found near Alaska in the Beaufort Sea. In 1986, many petroleum reserves were found in Alaska's Prudhoe Bay, which is within the this sea.

The Chukchi Sea is also within the Arctic Ocean, northwest of Alaska. This sea contains a shallow floor that provides nutrients and habitat for animals such as walruses, ice seals, whales, sea birds and polar bears. This sea is home to a tenth of the world's population of polar bears. The changing climate, causing temperature to rise, is affecting the population of polar bears, because the melting ice is making it more difficult for them to hunt for food. As the sea ice continues to melt, many oil and gas companies are interested in drilling in that specific area. 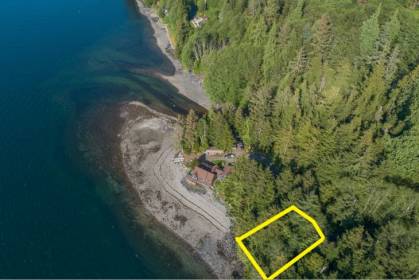 One of the last available beachfront lots on the north end of Ketchikan! The beautiful waterfront parcel boasts 108' linear feet of beach frontage and a private location. Just under a half-acre and wooded with mature timber and direct access to the lot from Stanley Road. Watch the whales, otters and seals from your front deck - an abundance of wildlife is always visible from this parcel. A peaceful and private setting for your waterfront dream home! 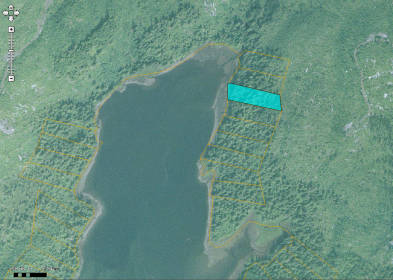 Spacious “Coon” Cove waterfront lot with 1.5 acres and 147' linear feet of ocean frontage. This lot faces south for ample sunlight. A great location for a remote cabin retreat on a sizeable lot in quiet George Inlet. 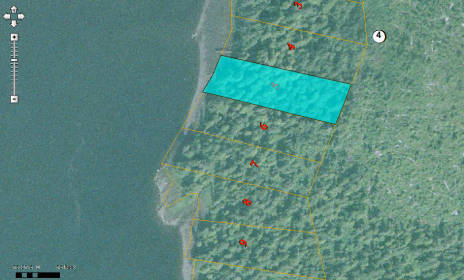 Spacious “Coon” Cove waterfront lot with 1.5 acres and 144 linear feet of ocean frontage. This lot faces south for ample sunlight. A great location for a remote cabin retreat on a sizeable lot in quiet George Inlet. 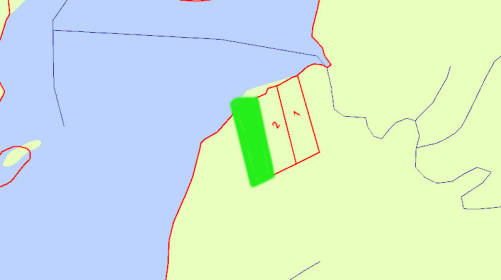 Excellent cabin site located inside of the waters of Coon Cove in George Inlet. 1.5 acre lot with 151 linear feet of water frontage. This site is a quick boat ride from local harbors and will make the perfect weekend getaway. 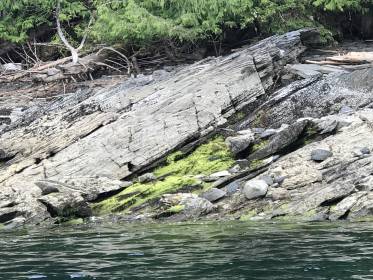 Secluded lot on the west side of Coon Island In George Inlet. Nice building locations, Deep water access, and a view both North South and West. A great little summer community of true Alaskans exists in the area. Owner financing available. 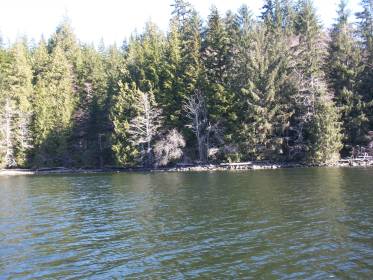 Large waterfront lot in George Inlet. This lot has a nice flat, rocky beach and gentle grade and is remote enough for your private retreat yet easy access from Ketchikan. Come build your dream cabin today! Seller will finance O.A.C. 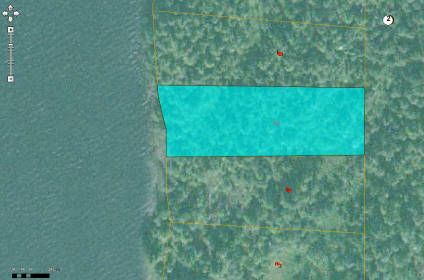 Large 1.5 acre waterfront George Inlet lot! A short boat ride from Mountain Point will bring you to this Gem Cove property. 131’ linear feet of ocean frontage. Good access for fishing, crabbing and hunting - just out the front door of your future cabin retreat! 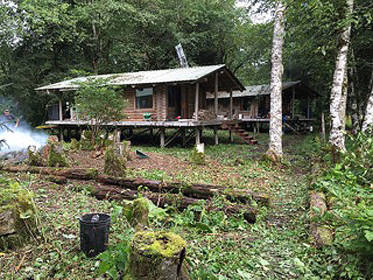 Fantastic family-compound located on the banks of the famous Unuk River approximately 45 air miles from downtown Ketchikan. Sitting on a nearly three-acre parcel (2.94 acres total) this site offers 233 linear feet of river frontage, with four cabins total, on-site septic system and a boat/float plane landing dock. Cabins consist of a single cook’s cabin wired with 110 power, refrigerator and oven/stove and three sleeping cabins each with a bathroom.  This is a rare opportunity to own your own piece of private riverfront land within the Misty Fjords National Monument. 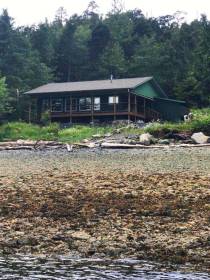 Freshly painted living room, dining room and kitchen on 7/23/19. Custom built in 2012, this custom built two bedroom one bath home sits within Bald Headed cove, on Pennock Island. Enjoy the water views that this 1,198 sq. ft. home has to offer, minutes from Thomas Basin harbor. New battery bank charged by solar panels with 110v inverter. Honda generator as a backup power source. Propane range and electric refrigerator. Kumo oil stove for heat. Water cistern with roof catchment system. All of these features make this home completely self sufficient and not dependent on a public utility. Enjoy your own acre of paradise with a mix of trees, wild blueberries, rhododendrons and wildflowers. Walk-able waterfront makes this property a must see. Only 7 years old this 1198 sq ft home offers views from every window. Open, light & bright best describe this wonderful home. Vintage sinks, butcher block counter tops and bead board cabinets with glass knobs give this home a classic farm house feel with all the modern amenities. Additional features include handicap size doors and hallway, LED lights and entry through the mud/laundry room . Home has a 5 star energy efficiency rate and is already certified with the state. PURs inspection done at time of construction and certified. There are no current rental or lease agreements, however this property has the potential as a vacation rental. Furnished with all the basic household items necessary it could easily be a turn key operation. 100% off the grid, this property runs on 3 solar panels with an Outback solar system and a back up Honda generator. Kitchen range is propane and there are 8, 10 gallon propane tanks for easy rotation and refill. Heat is provided by a Kuma stove that doesn’t require any electricity. There are 3 above ground fuel tanks (1 for gas for the generator and 2 for oil for the Kuma stove). Cell phone and internet access are best with Verizon but also available through T Mobile and GCI. There is limited coverage with Sprint. Water is collected from the roof/gutters into a 2500 gallon tank which is in an enclosed storage room attached to the house. New in 2012 with the replacement of the original structure. An abundance of Eagles frequent the cove, as well as heron and deer. Whales, sea lions, sea otters and mink have all been see from the living room window! Halibut and salmon fishing are just a quick boat ride away. The possibilities are endless with this lovely retreat. Enjoy the quiet solitude of life on an island. Live the adventure of off the grid living. All who enter are welcomed! 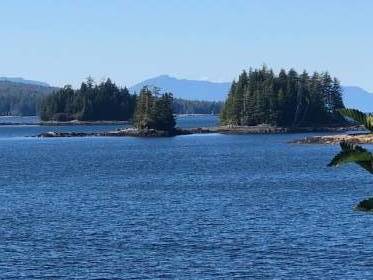 A quarter-acre island getaway! This island is nearest Oaksmith Island, Ward Cove and near Air Marine Harbor. The island has a flat, rocky beach and good topography for development. This island property has great potential for your retreat off our road system, yet close to town for supplies. Call Gateway City Realty for details.