One of the original 13 colonies, Connecticut is a state rich in history. It is the southernmost state in New England and the wealthiest state in the country per capita. While it is the third smallest state in size in the USA, it is home to 167 cities in just 8 counties. The population of the state is actually less than nearby New York City.

Connecticut is full of charm and rural beauty. There are a number of beaches at the shore, with State parks and forests throughout the state, and many smaller parks as well. The biggest river of the country splits the state into half.

Connecticut has been dairy farm country and cows used to dominate the rural landscape, but horses are about to take over. A census released in 2004 by the United States Department of Agriculture reported that there were 4,191 farms in the state in 2002, down from 4,905 in 1997, and that the number of cows has fallen 21 percent, to about 54,000. A survey by the University of Connecticut counted more than 47,000 horses. The University said that Connecticut already has the highest density of horses (one for every 68 people) in the country. Over 90% are purely used for recreational reasons.

The State's top schools include Yale University, and the State has numerous tourist attractions including world-class museums, Mystic Seaport, as well as the famous fall foliage. 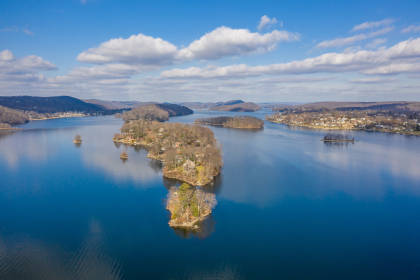 One of a kind Panorama on Candlewood Lake

DIRECT WATERFRONT (Western Exposure) on CANDLEWOOD LAKE in "Driftwood Point". Views of 4 fingers of the Lake! Outdoor amenities are highlighted by Mahogany Deck. Huge Terrace & Large Dock with about as level as you can get low maintenance property! Drive up to this pristine little Cottage/Cape, walk into the foyer feel a welcome charm and then feel your jaw drop! Designer Details and Custom Trim, Woodwork & personalized custom finishes. Hand made doors & inlaid wood floors throughout the main level. Vaulted GREAT ROOM w/Stone Fireplace is open to Grand scale inspiring picture window in Dining Room where you experience EPIC VIEWS. 2 Ways to get to Deck -side door or sliders. Kitchen w/granite counters, custom paneled refrigerator & dishwasher, enriched in wood w/hand made cabinets & special builtin drawers. Both bedrooms are available on the main level both with access to a new bath. The spiral staircase opens to a large loft/office with built-ins and another new full bath w/access to under eves storage. The basement provides good storage. Small low maintenance lot; small low maintenance house in absolutely pristine condition; absolutely (I kid you not) STAGGERING PANORAMIC VIEWS! A rare little gem! NEW SEPTIC/NEW ROOF/RENOVATED KITCHEN & BATHS. Centrally located in an excellent and easy commuting area for either full-time resident or weekend getaway. 5M to I-84. NOTE this offering includes 2 pieces w/cleared parcel across the street for additional parking.Taxes on MLS reflect both pieces. 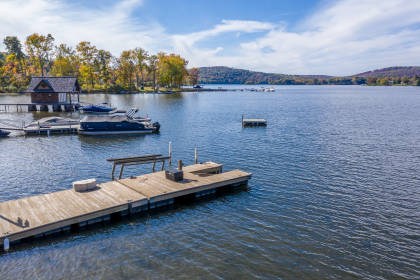 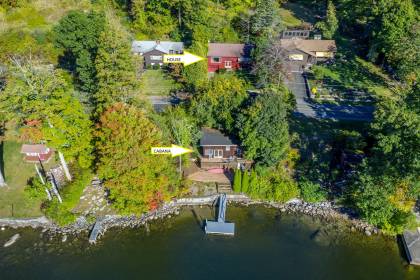 Sunsets Over the Lake

DIRECT WATERFRONT - Candlewood Lake w/WESTERN EXPOSURE. Classic 1960's Waterfront w/Cabana offers fabulous views of Vaughn's Neck. "Old Red" is awaiting your updates/renovations. Price reflective of as is / where is condition. Main House is 1400 sq ft with an open floor plan and fireplace as well as a fireplace in the lower level with an additional 500 sq ft that could easily be finished. Home has a rear yard that backs up to an extra lot with also has access off Candleset Cove. The WATERFRONT Cabana/Cottage is absolutely adorable with a kitchenette, loft, den and full bath. The waterfronts offer 2 large Decks, fieldstone walls and oversized dock. VIEWS/VIEWS/VIEWS. A truly wonderful package! TAXES on MLS reflective of entire package. House on .20 acres, rear lot .16 of acre, and .04 acres lakeside 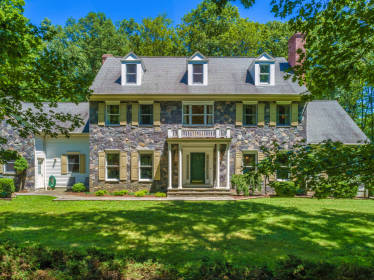 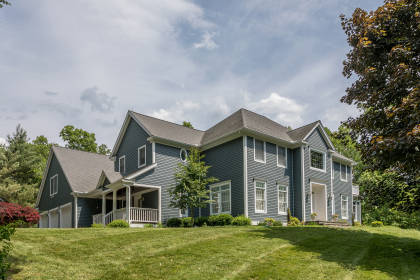 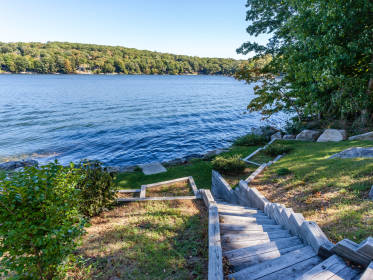 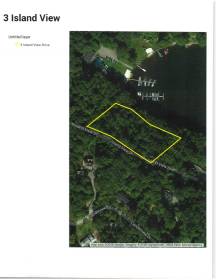 Time to build your Dream Home - 400' Frontage on Candlewood Lake 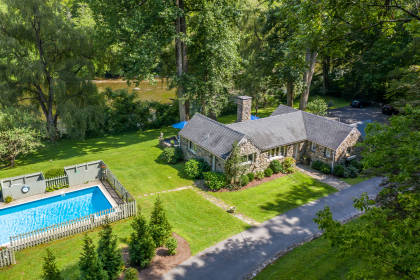 Stone Retreat on Banks of the Housatonic River

What Fairy Tales Are Made Of-Intimate RIVERFRONT Stone Retreat in story-book setting w/stonewalls & magnificent mature trees nestled on 2+ Acres at nature's doorstep. Mosey down to the river, a magical place of sunlight & shadows, shimmering leaves & bubbling water. The lush open lawn is perfect for a backyard picnic. A gardener's delight w/just the right amount of perennial gardens offering a flurry of color. Relax on a 50' stone terrace w/peaceful unobstructed VIEWS across this wide stretch of the River. Outdoor amenities are highlighted w/an inground heated pool for those hot summer days & a Hot Tub for those cool fall evenings. The casual sophistication of this handsome site pays homage to the art of leisure w/its classic New England charm. Lovingly updated, enter into a vaulted Great Room which immediately creates a mood of contentment & relaxation, accented by beams & stone fireplace. Enter an epicurean's delight -exquisitely renovated custom chef's kitchen is outfitted for the serious cook. The Dining Area leads onto the patio which is a natural extension for large scale entertaining or small intimate dining alfresco. Master Wing offers private bath-let the sound of the river soothe your soul! A private guest wing rounds out the living areas of this home. Beautiful hardwood floors are offered throughout. Plenty of room to work on your pet projects in the garage/basement area.Loads of parking available. 90 M to Manhattan. Bring your hip boots & fishing pole! FAIRY TALES DO COME TRUE! 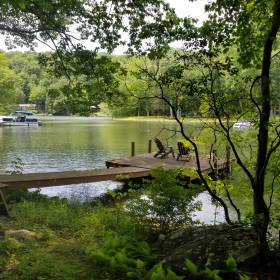 WELCOME TO THE LAKE! 100' DIRECT FRONTAGE/Candlewood Lake - Holiday Point Association, a private lake community. About as close to "Camp"" as you can get. Absolutely adorable A-Frame Cabin/Bungalow in back to nature setting. Large Dock & Boat House/Storage at Water's Edge. Nestled among pine trees and natural rock outcroppings wander down to the cove and Fish, Swim, Ski. Curl up with a book and experience total relaxation on the vaulted screened porch. It's nearly as big as the house and truly the ahhhhhhhh experience. Considered a "tiny" house it still offers a living/dining area, adorable bedroom w/bunk beds as well as a sleeping loft and full bath. Although seasonal at this time, it could be quite easy to make this a year round bungalow. Bring your fishing, pontoon, sail or ski boat boat, sun fish or canoe! We will supply the bait and tackle box! Don't miss this Cool Catch On The Lake! BONUS - there is also a community beach to socialize- if you choose to! (Loads of parking for cars and/or boats) NOTE - newer septic and newer well! 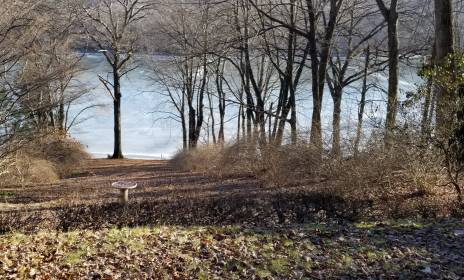 Direct Waterfront on CANDLEWOOD LAKE. Total renovation/tear down. Property being sold "AS IS"