Delaware is located in the northeastern portion of the Delmarva Peninsula and is just 96 miles long. It ranges from 9 miles to 35 miles across, totaling 1,954 square miles. That makes Delaware the second smallest state after Rhode Island. Estimates rank the population of Delaware as 45th in the nation, but 6th in population density, with more than 60% of the population in New Castle County. Delaware is divided into three counties. While the southern two counties (Kent County and Sussex) have historically been predominantly agricultural, New Castle County has been more industrialized.

The State ranks second in civilian scientists and engineers as a percentage of the workforce and number of patents issued to companies or individuals per 1,000 workers. The history of the State's economic and industrial development is closely tied to the impact of the DuPont family, founders of the DuPont Corporation, one of the world’s largest chemical companies.

Delaware also grows a great variety of fruits and vegetables and is a U.S. pioneer in the food-canning industry. Corn, soybeans, potatoes and hay are important crops. Delaware's broiler chicken farms supply the big Eastern markets, and fishing and dairy products are other important industries.

Delaware was one of the 13 colonies participating in the American Revolution and on December 7, 1787, it became the first state to ratify the Constitution of the United States, thereby becoming known as “The First State”.

Since almost all of Delaware is a part of the Atlantic Coastal Plain, the effects of the ocean moderate its climate. 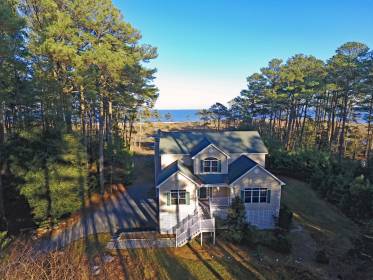 Unique property with views of Rehoboth Bay and flanked by a State Nature Preserve on one side, a private 4.5 acre estate on the other side and the Rehoboth Bay in the front. This 3 BR 3BA home includes an office that can serve as additional sleeping space--or a good place to work remotely. The large entertaining rooms feature a sun-filled double living room (41x18) with fireplace, a separate dining room and an expansive modern eat-in kitchen opening to a huge 644 sq ft screened porch overlooking the water. The screened porch is the ultimate in outdoor living with a hot tub, seating area and dining area overlooking the private pool, welands, woods and Bay. Enjoy lounging in your pool or walk down the path in the Nature preserve to the beach on the Bay. Upstairs there is a very large MBR with bath and walk in closet, two guest rooms, full bath and office. The upstairs rooms share a large oudoor deck with panoramic view of the Bay and Nature Preserve. Home has been updated in 2020 with two new HVAC systems & Rinnai. There is an elevator for access to all floors and lots of room under the home to park multiple cars and store all your sporting equipment and beach toys. Rehoboth Beach, Lewes, and the Atlantic Ocean beaches are 10 miles away. 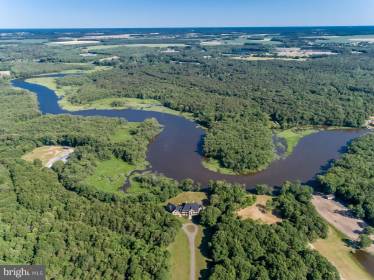 This is the waterfront estate you have been looking for! This grand home is nestled at the end of Bailey's Landing Drive on Broad Creek. This parcel offers tranquility, privacy and grandeur at its best! Situated on a 6.59 acre waterfront home site with abundant wildlife, enjoy coffee or a cocktail while viewing gorgeous sunsets over the water! This is a rare opportunity to own a piece of history. Previously it's own small town, Bailey's Landing is now home to several prestigious custom built estates.